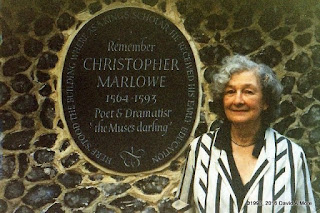 So, on May 30, take a moment to remember "the muses' darling" —an atheist martyr whose early exit from life set the stage for his pseudonymous rebirth as the author known as "Shakespeare.
Posted by Parentheticus at 12:36 PM No comments:

Last month, some lines excerpted from The Marliad (an epic essay in verse) won 2nd prize as a stand-alone entry in the Fort Collins, Colorado, public library's annual poetry contest. It wasn't quite as satisfying as winning the coveted Hoffman Prize, or another prestigious literary award, but it's a step in the right direction!

To all you Shakespeare fans, I dare to say
The Stratford actor never wrote a play,
No way: Kit Marley (known as “Marlowe”) wrote
Four centuries ago the words we quote
From the collection called the Folio
Of Shakespeare Plays—and scores of Sonnets, so
Listen up! The evidence makes clear
That Marley used the pseudonym Shakespeare—
Which worked out well for Mr. Will Shakspere,
Whose name got him a sinecure and share
Of ticket sales at the Globe Theater door—
Although not knowing whom he stood-in for:
The greatest poet of his time for sure.

None stood above Kit in dramatic art.
On top of that, he played a secret part
In England's anti-Catholic war: a spy
Who gave good service to the Queen, no lie.
But his belief in Jesus Christ fell short,
According to a sland'rous, signed report
Addressed to Privy Councilors at Court
(A list of blasphemies Kit spoke in sport).
The hearsay was heresy—dangerous it read:
His mouth must be stopped. (His words had 'street cred')
The upshot was a dagger in the head
Two inches deep, the Royal Inquest said.

But Marley's sudden end did not mean dead,
Because another head got stabbed instead—
That of a Welsh reformer with bad luck,
Into whose cadaver the blade stuck.
In fact, Kit Marley's murder in a fight
Was faked by friends who had their story tight—
And tacit right (per royalty's discernment)
To end his plight and foil his internment.

The punishment for blasphemy was certain—
A tragic scene before the final curtain—
Burned to death—or strangled by noose end—
Would be his mortal fate. (Oh, Muse forfend!)
The plan to rescue him had no loose ends—
The jury bought the story they confabbed,
How Christopher allegedly got stabbed
By his companion in a "tavern brawl"
About the tab for food and alcohol.

Th' equation was simple. Do the moral math:
Instead of punishment to take his breath,
They banish him for life and fake his death;
Thus saving Kit from certain prosecution
For heresy—and painful execution—
So he'd continue dishing-out sublime
And timeless poetry while in his prime:
The greatest poet-playwright of all time.


Posted by Parentheticus at 7:13 AM No comments:

Award-winning novelist and Marlovian scholar par excellence, Dr. Ros Barber has written an analyis of a unique poem contained in the Bodleian Shakespeare First Folio employing a "Marlowe-shaped lens" and the result is ... Marlovian gold! Whoever wrote the poem (sometime between 1668-1700 Barber reasons) carefully removed Ben Jonson's verses on the Folio engraving of Shakespeare and replaced them with the verses you see here. 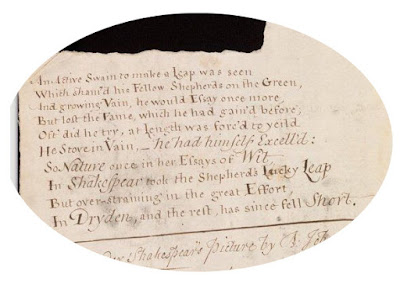 Dr. Barber interprets the poem line-by-line, concluding it's about Marlowe—his leap from life to death and back again—and how he surpassed his own famous (pre-1593) achievements in later life, using the pen-name Shakespeare! Read Ros Barber's persuasive essay available now on her website.
Posted by Parentheticus at 10:24 AM 5 comments: