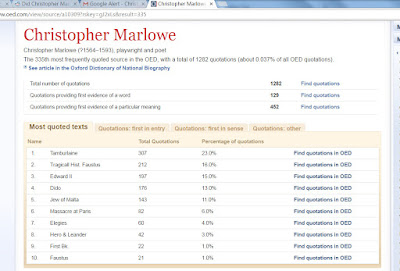 Audrey in the the house

As the number of views for WTF Shakespeare grows, I've been wondering what persons and demographic groups comprise its repeat readers (as opposed to, say, those who were searching for Marc Maron's WTF podcast finding this by happy accident). Having a particular audience in mind helps the writer find greater focus and that other thing, you know.

Well, I am pleased to announce and introduce the audience I've conjured up. Her name is Audrey, an audiologist from Austin, Texas, but originally from Australia where she  viewed Mike Rubbo's audacious documentary Much Ado About Something 15 years ago. She has been pro-Marlovian ever since.

Although we agree on the basics of "Marlovian theory of Shakespeare authorship," Audrey and I disagree on some key (and controversial) details of the poet's story—especially the role of George Chapman as a possible "front" for Marley's more ambitious literary projects such as his completion of Hero and Leander and prefatory dedication to Lady Audrey Walsingham, wife of Marlowe's good friend, Thomas Walsingham).  My new BF Audrey will learn, "Shakespeare" was not the only authorial iron the poet had in the fire.

Like a handful of other Marlovians, I maintain it was Marley himself who wrote the continuation and dedication, not Chapman, whereas "Audrey Austin" thinks the styles are too different. Although she hasn't read the final four sestiads of Hero & Leander, she cites as evidence some lines from novelist Ros Barber's fictional telling of Marley's afterlife, in which Barber's protagonist claims that George "adds more wordage than the story needs/ alters [the] structure and destroys the tone,/ then dedicates it to [Tom Walsingham's] recent bride [Audrey]."

All of this Barber's fictional Marlowe finds highly offensive--and of course it would be highly offensive if Chapman's involvement transpired the way Barber presents it in her novel. But did George Chapman compose the final four sestiads of Hero & Leander. More importantly, did George compose the long and highly personal dedication to the wife of Marley's 'best friend'? It makes no sense that he would do either (if Marlowe was still alive), as I will demonstrate to Audrey from Austin—and the rest of my audience—in a future post.
Posted by Parentheticus at 3:45 PM No comments:

Yo Audrey, a man in Germany publishes a blog about Marlowe/Shakespeare with some pretty far out stuff, but interesting. Without reading more carefully (not anytime soon), no comment on the validity of his research or conclusions. I will say his website needs work (I should talk!) Most recently he posts a about Polimanteia, a book published in 1595 (two years after Marley's murder) containing on the earliest mentions of a poet "sweet Shakespeare". The author of the book (signed W.C.) has been persuasively argued to be either William Covell or William Clerke.

I think the author of the blog Mr. Bastian Conrad (who opts for Clerke) may be on to something worthwhile with his detailed analysis of Polimanteia showing how it reveals Marley's other pseudonyms. Are you familiar with Bastian's work, Audrey? I've reached out to him for a synopsis of his findings. I'll let you know what I find out.
Posted by Parentheticus at 12:26 PM No comments: